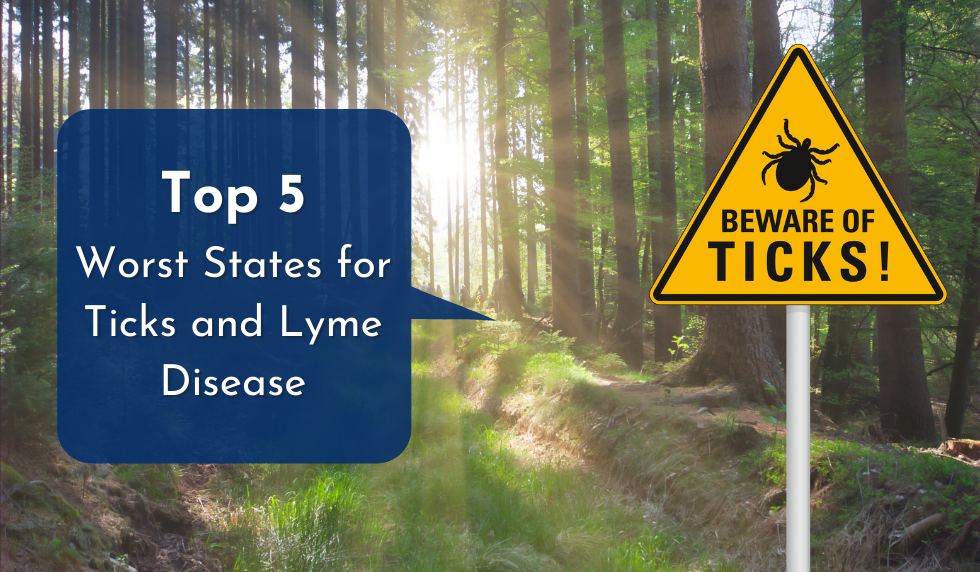 Ticks are a type of arachnid that dwell in wooded and tall grassy spaces and can live on other animals’ blood. Unfortunately, they also carry diseases like Lyme, Zika, dengue, and plague that they can transfer to humans through their bites.

While ticks may most commonly be associated with the northeastern part of the U.S. and the state of Texas, tick-borne diseases are, in fact, a pernicious and growing threat throughout the United States, with the CDC (Centers for Disease Control and Prevention) reporting over 640,000 cases of tick-borne diseases in the U.S. between ’04 and ’16.

With more than 12,856 cases each, all of the states below count among the top 20% of tick-borne disease cases per state in the U.S. The reported tick counts listed for each state were for the entire year 2016. Given a doubling of reported cases of tick-borne illnesses in the U.S. over the 13 years leading up to 2016, the numbers most likely can only be higher today.

Rounding out the top ten are:

As for Lyme disease cases, in particular, Vermont has the unpleasant distinction of having the highest incidence of Lyme disease in the U.S., with Pennsylvania and Maine tying for second place.

How to Prevent Tick Bites and Lyme Disease

You can take many precautions when going outdoors to protect yourself from tick bites and Lyme disease, not the least being to use a safe, healthy, and effective tick repellent. Proven Repellent is an odorless bug spray that’s also DEET-free. In addition to protecting against tick-borne diseases, Proven Repellent also protects against mosquitoes, black flies, and other biting insects, as well as the common vector-borne diseases they carry. Best of all, a single application lasts all day.