What Happens to Insects During Winter Months? 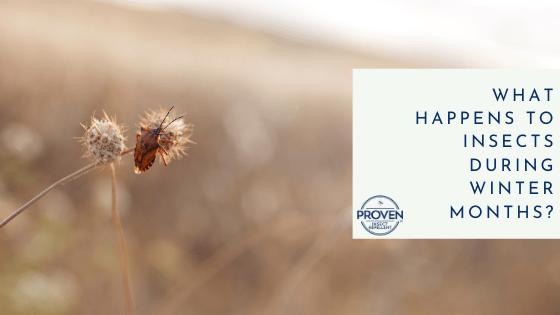 Humans have warm clothes and technology to keep them warm during the winter, but what about insects? How do they survive the long, frigid winter months?

When it gets too cold in their environment, some insects pick up and move to a warmer one. They can travel great distances by riding on air currents.

Diapause is a state of dormancy some insects enter during the cold season, comparable to how some warm-blooded creatures hibernate. All their activities and growth functions are paused in this state while their bodies persist in a partially frozen state.

Some colonies of insects snuggle up close to one another and rely on each others’ natural warmth to fend off the cold. In essence, the insects shiver to create collective body heat that serves as a sort of mini-radiator.

Some insects survive the cold by burrowing into warm ground and objects like tree trunks to wait it out.

Certain insects can produce substances that prevent ice crystals from forming on their bodies and allow them to survive frigid temperatures, not unlike antifreeze which protects a car’s engine from freezing in winter. Typically, the insects producing these substances, known as cryoprotectants, do so while in a diapause state. Cryoprotectants they may produce include sorbitol and glycerol.

Some insects were never meant to survive the winter. These insects lay eggs before dying that can then hatch in the spring to perpetuate the species.

Of course, every winter ends, and when they do, and the days start to lengthen, and the cold temperatures start to give way to warmer ones, insects come out of hiding, hatch from their eggs, emerge from diapause and collective body heat and return from migration. By the time summer arrives, insects are everywhere, pollinating flowers, decorating the landscape, and, in many cases, biting people and other animals.

When those biting insects like ticks and biting flies are present, you can protect yourself from them using Proven Repellent, a Picaridin bug repellent available in insect protection spray and lotion forms.

Keep in mind, as time and the ravages of climate change progress, the seasons will increasingly lengthen, and winters will become increasingly milder and warmer. This will lead more insects to survive winter and emerge in springtime to join the newborns, making for a predictably continued rise in insect populations in the years ahead. This is all the more reason to arm yourself with a healthy, safe, and, above all, effective insect protection spray or lotion-like Proven Repellent.